In 1978 Argentine footballers Ossie Ardiles and Ricky Villa signed for Tottenham Hotspur. My dad, an Argentine Spurs fan in London, wrote to the club and volunteered his services to guide Ossie and Ricky around London and help them settle down. The club responded enthusiastically - this was a time when London was far less multicultural than today and there weren't a huge amount of South Americans in the city.

The fateful day came when my father would be told whether he got the (unpaid) job. He was waiting at home for a phone call from Keith Burkinshaw, the then Spurs manager. He was getting anxious and popped out for a bit. The phone rang and I answered it. I was six years old. It was Keith Burkinshaw, asking for my dad. I chatted politely with Mr Burkinshaw and then promptly hung up and completely forgot about the message. My dad returned home and asked if anyone had phoned. I said no. My dad continued to sit around, wondering why Spurs hadn't called. Eventually, he called them and it was all sorted out. I was not brought before a firing squad.

For about four months my dad helped Ossie and Ricky settle in London. According to him, Ossie was a bit reserved but Ricky was friendlier - as my mum says, a proper porteño. The arrangement ended when an agent muscled in and told my dad to get lost. The agent smelt money whereas my dad, despite having a big nose, did not.

Both Ardiles and Villa has succesful playing careers at Spurs. Ricky is most famous for his mazy run and goal in the 1981 Cup Final against Man City and Ossie went on to manage the club in 1993. He was not a managerial success, perhaps because he forgot that football teams sometimes have to defend. 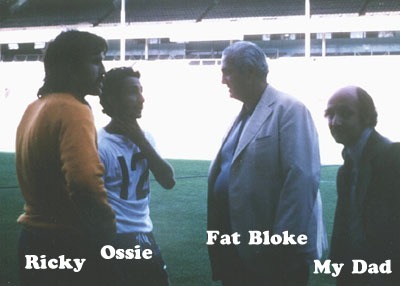 My dad returned to Buenos Aires in 1989. For some years afterwards, the figures of my father, Ossie Ardiles and Ricky Villa seemed to merge to form some Argentine Holy Trinity in my mind, in the same way that my mum and Maureen Lipman seem to be fused in my subconscious as one and the same person.

About 18 months ago I was visiting my dad in Argentina and I had a vague notion of writing an article about Argentine football. I thought it would be a nice idea to speak to Ricky Villa, who now lives just outside greater Buenos Aires. My dad phoned a friend, who spoke to a man who contacted Ricky. He didn't remember my dad, but his wife did. She had very clear memories of my dad showing her and her mother around various London pubs. Women always remember these things better than men. I never bothered writing the article, but it was nice to tie up some old loose ends.

This isn't really an anecdote. It's the story of my name. People quite often ask me how I ended up with such an exotic name, particularly since I don't look at all exotic. I look like your standard, pasty white man in London. I am tempted to say that I have olive skin, but it's not really olive - it merely retains a yellow tinge from being born with jaundice.

My paternal grandfather, Isaac, was born and raised in the town of Mogilev in the Ukraine, near the Romanian border. My grandfather's older brother had been conscripted into the Red Army and had returned crippled and traumatised. Isaac knew that the army was basically a death sentence, so when the conscriptors came knocking on the front his door, he ran out the back door as fast as he could. He jumped into a river and managed to float into Romania on a log. He spent five years in Romania and then hopped on a ship to Buenos Aires, Argentina, where he met my grandmother Rosa. She was born in Russia, but arrived in Argentina when she was four. Isaac and Rosa had four children, including my dad, who was born and raised in Buenos Aires. Isaac died before I was born, but I have many fond memories of Rosa.

My maternal grandfather (also an Isaac) was also born in Mogilev. But not the same Mogilev. This was Mogilev in Belarus (it's sometimes known as White Russia so presumably it's not as multicultural as London). Fleeing poverty and persecution inTsarist Russia, he arrived in London with his mother and siblings at the age of 10, joining his father who had preceded the family to London. Isaac was the eldest of his siblings and the chief breadwinner. He started work at the age of 12 - his parents had told the school he was two years older than he really was - and he flourished in England. I know that he worked in a barbers shop on Commercial Road, but this was all many years before I was born, and my memories of him are mostly of the large house that he and my Grandma Anne owned in Willesden, north-west London. Isaac and Anne had two children, one of whom was my mother.

My mum and dad met in New York in the late 1960s. I know - it all sounds very cosmopolitan. My mother was a doctor (back in the days when very few women became doctors) and was working in a New York hospital. She had a colleague called Marta, who was my dad's younger sister. My dad was in New York learning English, admiring the architecture and being an aspiring artist. They met. They courted. They moved to London, married and settled here. My older sister was born in 1970. My twin sister and I were born in 1975, in St Mary's hospital, Paddington. My parents split up in the late 1980s.

So that explains my surname. I owe my first name to the jewish tradition of naming children after deceased relatives. My father had a cousin called Gregorio, but nicknamed Chino because he looked Chinese. He lived in the same neighbourhood as my dad in Buenos Aires. He died in his twenties from the complications of epilepsy. I suppose that names are a lottery - my older sister ended up with the English/jewish name. My twin sister ended up with a Hebrew name and I ended up with the Hispanic name. I do wonder whether the nature of the names determined our personalities and outlooks.

But for all my wandering roots, I've always just been Greg. I don't feel particularly exotic. I grew up in Muswell Hill. I can't speak Russian. I can't dance the tango. I can read Hebrew at the rate of a word a minute.