"Weddings come and go, but divorce is final."

So said my ex-wife when I bumped into her outside court. She was being charged with illegal possession of a firearm and I was acting as a character witness. She had shot some pigeons. I don't blame her - bloody vermin. 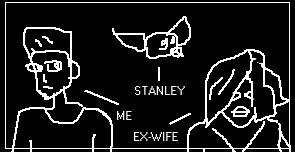 During our marriage - or sham, as she liked to call it - she had become increasingly obsessed with the neighbourhood birds. She couldn't leave for work in the morning if there were starlings on the lawn. She couldn't bear it if there was birdsong during breakfast. Sadly, our garden backed onto a wood, and there were always birds there, so she was constantly on edge. She refused to leave the bedroom. She didn't go to work, and eventually she lost she job.

All her neuroses and guilt (she was guilty of many things, from loving too much to living too little) were transferred onto the damned birds. She simply stopped functioning. As with many such breakdowns, I suspect that subconsciously she needed to fall apart, and that her obsession with birds was merely a convenient prop. The same is true for cars. If you ever find yourself on the hard shoulder, with flames coming out of your bonnet, you had best call a psychotherapist, rather than a mechanic... a car only breaks down when it can't go on. Most car crashes are cries for help.

She was convicted of a gun offence. She had already spent time in jail following a dispute with a local florist that ended with her wrestling the poor soul to the floor in a headlock. The magistrate was not lenient. She got six months. Strangely, she seems quite happy. Danny and I visit her once a week.

Fortunately, she can't see any birds from her cell and is much calmer now. In many ways jail suits her - she enjoys the routine and discipline of prison life and even seems accustomed to the relative absence of freedom. She's also gotten very good at pool and ping pong. Still... I am happier since the divorce. I like birds.