"What am I doing with my life?" thought Anthony, as his spacecraft sped towards the sun. For some reason, the spacecraft was an exact replica of a British 1980's ice-cream van, complete with tatty stickers representing the various ice-creams and lollies. Of course, under the bonnet the spacecraft was a state of the art flying machine, but to casual observers it did look like a van full of choc ices. Anthony had asked the guys at NASA why his ship had to look like an ice-cream van. 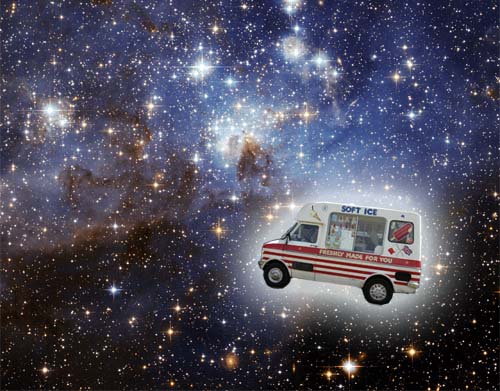 "Cuts down on wind resistance," they had said, delving into the freezer for a Magnum.

On the rare occasions that he slept, Anthony had dreams that the spaceship would be approached by aliens, and that they would try to buy a load of 99s, but he wouldn't have the correct change. He would wake up in a cold, nauseous sweat. He didn't much like the idea of man's first encounter with extra-terrestrials being dominated by an argument about change.

Anthony wasn't alone on his spacecraft. Alongside him were Jon, the NASA-appointed robot, and Peter, a Polish builder who had stowed away on the ship back on Earth, unaware that it was to be sent on a mission to the sun.

Jon was ok. He was a bit pompous, and spent most of his time at the back of the van reading Samuel Beckett, but he was good for a laugh and would join in with Anthony's games of I Spy. Peter didn't say much, but as long as he was kept supplied with plenty of hot tea, he kept himself to himself, and he was handy when the freezer broke down.

Anthony often wondered exactly why he had been chosen for the mission. His scores in space-school had been average at best, and he was prone to claustrophobia. He wasn't even totally clear about the point of the mission; it was something to do with replacing a filament in the centre of the sun. On bad days, he had the sneaking suspicion that NASA just wanted to get rid of him.

"How long will the mission take?" he had asked them.

"Dunno. Could be a week, could be 45 years. Space travel isn't an exact science," they had shrugged in reply.

"Fuck off," they had chanted in unison. That had ended the conversation. 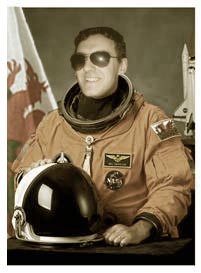 He thought back to the women he had left behind on Earth. He had to admit that they were all pretty ugly, and vowed that if he did ever return to Earth, he would up his game, and start going to different clubs. He would brag to women about his mission to the sun, and flash them his Cornetto shaped medal. Of course, he'd have to do something about Tessa first.

Tessa was his girlfriend. Tall, hefty and with buck teeth, she was attractive if you squinted, or held up a photo of someone else in front of her face. Sadly, she had been paralysed in a golfing accident 8 months ago and the doctors had told her that she would never walk again. Now she spent her days in a wheelchair, sobbing at the top of the stairs. At times she tried to get out of wheelchair and walk about, but ended up just dragging herself along the carpet with her arms.

"I don't know why you do that," Anthony would say. "The doctors have said you're not going to walk again."

"Thanks for your support, darling," she would spit. Women, eh? Totally irrational.

Anthony was broken from his reverie by Jon taking a seat beside him. He looked uncanilly like Martine McCutcheon, although the robot had a glimpse of sentience behind his eyes that was perhaps missing from the real Ms McCutcheon.

"Do you know," said Jon, pushing his spectacles up from the base of his nose, "I think that Happy Days is possibly Beckett's finest work. It's certainly more striking than Godot."

"Yeah, I always liked Happy Days," said Anthony. "Although it was a bit strange that no-one noticed that the Fonz was essentially a 40-year old man in a leather jacket, and not really that cool at all."

At the back, Peter hollered plaintivelty for tea, but the pilot and robot chose to ignore him.

"So, here I am," mused Anthony, thinking out loud. "In a sense, I am an everyman, a Crusoe, God's first child Adam, cast into an interstellar Eden. I am the first of a new breed. Perchance I will stumble upon an interstellar Eve, and we shall create a new race, unburdended from original sin."

There was silence, and then the pop as Jon opened a can of Dr Pepper and chugged it back in one go.

"Ah," said the robot, wiping his mouth on his sleeve. "You really can't beat Dr Pepper. It's misunderstood."

"But not as misunderstood as I am," thought Anthony bleakly, as the ice-cream van continued its fiery path towards the sun...