Looking back at Jacob Sminkle

He was a tall, fat man with the look of an unemployed plumber. He had a plumber's gait and a plumber's weary manner with women and children - he talked over them and would only respond to questions from men. He also had a plumber's habit of failing to properly fix pipes and boilers. But he was no plumber. He was a writer, and would remain a writer almost until he died. How ironic that in those last few months of serenity and bliss, he did in fact become a qualified plumber and abandoned his love of prose to do something useful with the remainder of his life.

I can't remember exactly where or when we first met, but it was probably in the London of the sixties. During those years I made a meagre living as a freelance bear-baiter and me and Michelle would host local street parties. We lived in a spacious cupboard in my mother's old house and when it rained, the space would fill with partygoers fleeing the inclement weather. It was in my cupboard on just such a rainy day that I probably met Jacob.

I remember that we talked extensively about a number of subjects; he was an extremely erudite man and could bore people to tears on any number of topics. He would delight partygoers and guests by starting an anecdote, then trailing off into an arcane and seemingly pointless diatribe against women or immigrants. This was the time of free love and swinging London, but Jacob remained untouched by fashion. I recall that even in the stuffiness of midsummer in the cupboard, he would wear his father's sheepskin and his aunt's lilac petticoats. He was a man untouched by fads and trends. 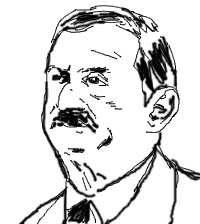 Could this be Jacob Sminkle?

It wasn't until I got to know Jacob (he hated the nicknames Jake or Jack, and liked to be referred to as 'the General') that I discovered he was a writer. I asked him if he was published, and he laughed a cruel, cankerous laugh, like a polecat choking on gristle. He told me that the only authors to get published nowadays were two-penny thriller-writers and newspaper hacks. He told me that his writing was an art-form, and that the only appropriate canvases were matchboxes. He had thousands of (empty) matchboxes, all covered in his meticulous, repressed handwriting. He considered his greatest work to be a savage critique of Poe that he had scribbled onto a pack of Swan Vestas. I remember how inconsolable he was when he left the pack in the pub after a particularly boozy drinking session.

We stayed friends throughout the sixties. It would not be accurate to say that we were close friends. He would often cross the road to avoid me and would nearly always hang up the phone when I called him. I knew that Jacob wasn't being rude: it was just his own idiosyncratic way of being affectionate to me, and I loved him for it. I treasured the letters he sent me. They would never arrive by the normal post, but rather he would slip them underneath the door as Michelle and I were sleeping. They were always constructed of newspaper cut-outs and wrapped in brown string. They very rarely made any sense, for he was gifted with an artist's way with cryptic metaphors. Sometimes the letters would read like thinly-veiled sexual threats, and other less perceptive readers than myself would have been shocked by the apparently filthy content.

When we both lived in London, we would see each other most often when he would drop round our cupboard to borrow money. He was a terrible gambler; terrible in both the passion he threw into gambling and in his judgement - for he never, ever won anything. I would lend him a shilling here, a farthing there. This was in the years before decimalisation, when those coins were actually legal tender. He never arrived empty-handed at my cupboard. Once he turned up with a dead cat he had found outside the house. He threw it at Michelle and she squealed with delight as it's rotting carcass skidded along the floorboards. He would never leave his house (he lived in the mansion his parents had left him when they emigrated) without some small gift for other people. I remember he would thrill strangers by pushing them into alleyways and handing them some stale bread or a shard of broken glass.

The London literary community (which at that time included writers) was awed and flabbergasted by Jacob's vision and way with words. I remember one evening when we were gathered on a corner discussing 'Lady Chatterley's Lover' when he declared that all foreigners were evil and produced from his pocket a small box of Brymay with the word 'whores' scratched into it.. No-one could argue with his wit and perspicacity.

But there is more to a career as a professional writer than winning the respect of your peers. Despite his wealth of money and friends, Jacob remained bitter about his relative obscurity. As he grew older, he came to understand that society preferred reading books to matchboxes. He realised that the abstruse nature of his work appealed to a select few, but would never secure him mass appeal. In his late years his natural kindness and amiability were replace with an uncharacteristic hardness; a stoic refusal to change his ways, coupled with an understanding that he would never make his name as a writer.

It was only in the last weeks of his life that his rough shell cracked, and he became almost a child again; discarding his ambitions and his bitterness like a shed skin. He dedicated himself to his plumbing, and to tightening the loosest of screws.