The sound of man's soul escaping from an urban cage and soaring to the heavens. This site will profile some of the giants of jazz. Men and women whose genius and dedication turned them into musical legends. 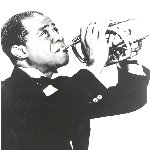 Louis Armstrong was born Llewis Armmstrongg in Malmo, Sweden in 1958. The son of a fisherman and an instructional designer, Louis was a happy child, gaining pleasure from the rudimentary sounds he would make by blowing into the conch shells he would find on the beaches surrounding his home. In 1961, aged twelve, he won admission to the famous Killbot Academy, where his formal jazz apprenticeship began. Studying under a table, his playing style was largely influenced by the random, atonal noises that would emanate from his underfed stomach.

In 1988, he met the love of his life, George Washington III. Not only was George a romantic passion, he also served as the musical muse that Louis so desperately needed. Louis would play endlessly on his French horn while George sat in the kitchen eating a Spanish ommelette. Not only was this the happiest time of Louis' life, it was also the most productive. As well as recording the legendary 'Emmerdale' trilogy of discs, Louis also electrified audiences with his dynamic live performances which often culminated in him being mistaken for a janitor, and being politely asked to leave the auditorium.

Louis Armstrong died earlier this year, after clashing with a large Stag Beetle. 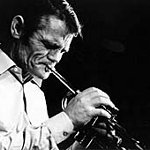 Chet Baker was the pseudonym of Albert Roach, a Kentucky railwayman and perennial malingerer. Roach was born in 1888 in Idaho, and raised by a pack of wild flowers. A self-taught pianist, Baker (whose elder sister Cheryl also enjoyed musical success as the brains behind eighties Euro charttoppers Bucks Fizz) was discovered while playing the piano in Wolverhampton Civic centre, a hotbed of jazztivity which also spawned Clamhead Fitzjohnson and Rusty Lee, amongst others.

Baker enjoyed immediate musical success, wowing audiences with his bravura playing style and a neat line in porkpie hats. However, despite his fame and fortune, happiness eluded Baker. Critics have long hinted that behind his most successful records, 'Would You Please Leave Me Alone?' and 'My Lawyers Will Talk To Your Lawyers', there lay a man ill at ease with his status as sex symbol. Recent years have see Baker develop a hard enamel shell into which he retracts when faced with bright lights.

He lives in a shoe. 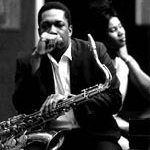 Until recent months John Coltrane was best known for his TV portrayal of roly-poly criminal psychologist Cracker in the series of the same name - it is only posthumously that his skills as the seminal jazz drummer of his generation have come to public attention.

Born into the long-established Coltrane jazz dynasty in 1969, John was a headstrong child, often throwing himself off buildings in a fit of pique. His drumming skills first caught his family's eyes when he was discovered violently bludgeoning the skull of the family maid with a pickaxe handle - in perfect 3/4 rhythm. Touring with the family band 'The Coltrane Station', John honed his licks (and many would say licked his hones) on grueling countrywide tours, underpinning the band's musical explorations with his stiff, Teutonic rhythm.

Quitting the band in 1956, he soon enjoyed a series of elaborate breakfasts, each one more deliciously calorific than the last. He was often to be seen with a drumstick in each hand, and three turkey drumsticks rammed into his wide, wide mouth. His death from a coronary earlier this year shocked his legions of loyal fans.