I am sitting in the doctor's surgery, reading 'Girl About Town' and pretending to do the crossword. My leg is sore. Last night I was drunk, and stepped in a mantrap. I ended up gnawing my foot off in order to escape.

Earlier, I asked the doctor how long it would take for my foot to grow back, but he was very evasive. Frankly, he didn't inspire confidence. So, I'm sitting here while he gets me my antibiotics. The man opposite is mumbling under his breath - he seems to think that people care about him. How stupid. Very bad indeed. 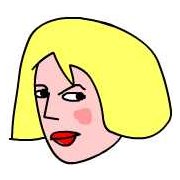 I'm actually a lot prettier than that pic, but it was a bad photo. In fact, so bad that it was more of a sketch. My ex-boyfriend Leslie took that photo. It was in Barcelona in the summer of '98. It was a happy time for us. Leslie was earning loads as a Management Consultant and my radio career was just beginning. 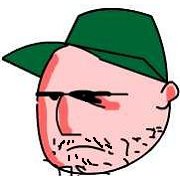 This is a picture of Leslie

Leslie looks very different now. Firstly, he's lost a lot of weight. And secondly, he's dead. He was a very sweet man, but if you make a habit out of jumping off tall buildings you will eventually pay the price. What with his death and my leg, we're a right pair of sorry little soldiers.

For a while after his death I tried being a lesbian, but I couldn't be arsed with telling my family about it, so instead I decided to marry Karl, Leslie's best mate. Karl was very distraught when Leslie died (He was about to buy the building that Leslie stepped off) and as we comforted each other, love blossomed. 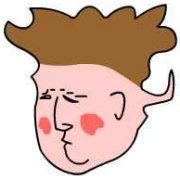 This is a picture of Karl

As you can probably see, Karl suffers from Noidal-Brevett's syndrome, which makes the back of his neck and head form into yeasty peaks. Still, he's awfully good in bed and has the most wonderful Labrador called Dog. Karl and I are engaged, although we haven't set a date for the marriage. I want to wait until his neck clears up and my foot re-grows.

A summer wedding would be nice. My parents live in Rimini, so they'll be coming over - and Karl is planning on digging up his parents (they died in a fire on their houseboat) so the wedding will be a real family occasion. Family is so important.

Ah, here comes the doctor now. I do like a man with a hacksaw.