Oscar the Grouch lives in a large house just off Sunset Boulevard.

It is all red bricks and it stretches all the way up to god - it's the kind of house they don't make anymore.

I pulled up to the house about 30 minutes early, the traffic had been a dream. I was greeted by Hortense, Oscar's maid. She prepared me peppermint tea and shot me a knowing smile. Twenty minutes later, Oscar emerged. His green fur was matted from the shower and a towel was wrapped around his waist. He looked taller than I was expecting, but then I guess you never see the whole of his body when he's crouched in that garbage can.

The first thing you notice when you're talking to Oscar is those big blue eyes. Fifty years ago, when Hollywood was something other than a recycling plant, he'd have been a matinee idol.

Oscar disappeared into his study and re-emerged wearing casual slacks and a sports jacket. We started to chat.

PLAYBOY: What I'd really like to know is you whole life story! But I guess we'd better focus on your time in Sesame Street.

OSCAR: Well Bill, I've got a lot of stories to tell. I grew up in a rough area of the Bronx. You had to scrap just to make sure you still had your wallet at the end of the day. But life has been good to me. The Sesame Street gig pulled me out of the barrio and I'm always grateful for that opportunity. Sesame Street made me the grouch I am today.

PLAYBOY: How did you end up on Sesame Street?

OSCAR: Well, it's kinda funny. It was all an accident. My neighbour Phil Hozlek was just desperate to become famous. He wanted so badly to be a movie star. Every time there was any kind of audition, he'd be first in line. And sometimes I'd just tag along because there wasn't an awful lot to do in them days - you had to entertain yourself. So, one day he's coming knocking on my door, telling me about auditions for a new TV show for kids. And I just was just waiting in line with Phil when a casting director spotted me and thought I'd be great as a grouch. Phil never did become famous. I still see a lot of him though - he's a great guy.

PLAYBOY: When did you realise how big Sesame Street was becoming?

OSCAR: Oh, we all saw pretty quickly how good the scripts were. And when you see a script that good, you just keep your fingers crossed and hope the public is smart enough to see that they are on to a good thing. I mean, when the first series began I felt like Elvis and the Beatles all rolled into one. (lights cigarette) It's hard for people nowdays to remember the hysteria that surrounded the first series of SS. It was a crazy time and we were never quite sure when the rollercoaster would end.

PLAYBOY: How easy was it for you to adjust?

OSCAR: It was hard at first to see who was your real friend and who wanted to use you. Everyone wants a piece of you - you're no longer an individual, a lot of folks just see you as a commodity, or their passport to fame and fortune. Fortunately my family have always kept me very grounded. If I ever started to believe my own press, they'd bring me back down to earth pretty darn quickly.

PLAYBOY: Throughout the seventies, you were linked with many beautiful women. You must have had a great time.

OSCAR: Oh sure (laughs). You have to remember this was before AIDS. Everyone was having a great time. Me, Fozzie and Kermit would have to fight the ladies off every time we left the set. It was madness. We were like the ratpack. But I enjoyed it. I've always enjoyed fame. I'm not someone who complains about the price of fame - for me it has always been a blessing. I've always loved women and they've always liked me. The seventies were a wild time and I certainly enjoyed myself.

PLAYBOY: There were always rumours about you and Farrah Fawcett?

OSCAR: Oh, a gentleman never tells. If the press saw me in the same room as a female celebrity, I was suddenly having an affair with her! Which was hardly fair on the ladies! No, I took a lot of the gossip as flattery, but obviously you take it all with a pinch of salt, because 90% of the gossip is just lies created to sell papers. As for me and Farrah, we enjoyed each others company and we still see each other on the tennis court. She has a mean backhand!

PLAYBOY: Did the seventies ever get to you? I mean, there was a lot of excess.

OSCAR: Sure, but I grew up in the ghetto. By the time I was on TV I had already lost a lot of friends to dope or booze, so I knew to be sensible. Sadly there were a lot of Sesame Streeters whose paychecks went straight up their noses. And remember, there were a lot of big noses back then - even a few trunks. I don't preach, but I know how to steer clear of junk. I'd tell any kid out there: it ain't worth it. 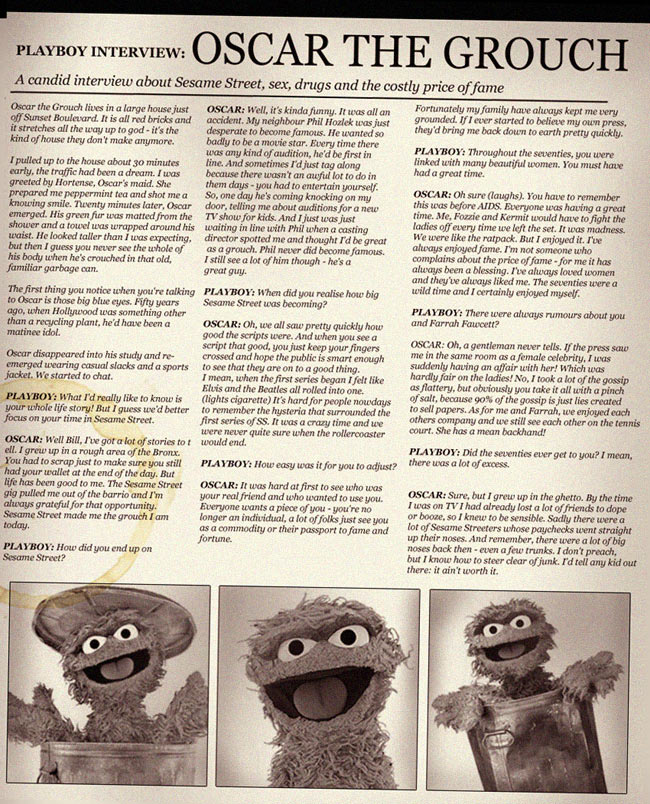